Cannabis stocks got off to a blazing start to 2019 – trading deep into the green early in the year. But the sector has been weak for the last few months, falling into a bear market. Today I am going to provide an update on what has been going on and what to expect in the second half of the year.

Below is a 2019 chart of the ETFMG Alternative Harvest ETF (MJ) – a cannabis sector mutual fund that includes cannabis stocks from the US and Canada.

You can see the rally early in the year and the weakness that followed.

Here’s the big question: why has the cannabis sector been weak?

There’s a few reasons why the cannabis sector has been weak.

#1 After the big gains early in the year short-term traders and investors took some quick profits off the table.

#2 The broader stock market fell close to 10% in May and that weighed on the cannabis sector.

#3 Canadian cannabis sales have been slower than expected since going legal last October.

#4 The cannabis sector is prone to periods of extended weakness followed by huge rallies.

Despite the bear market – the cannabis sector is still up 12% in 2019 and I am optimistic on the second half of the year. I see 5 triggers that tell me cannabis stocks should be strong in the back half of 2019.

What Should We Expect in the Second Half of 2019?

After weakness this spring, the cannabis sector looks oversold. You can see that in the chart of Canopy Growth Corp (WEED, CGC), the largest cannabis company in the world. Shares were recently the most oversold they have ever been. Take a look below. 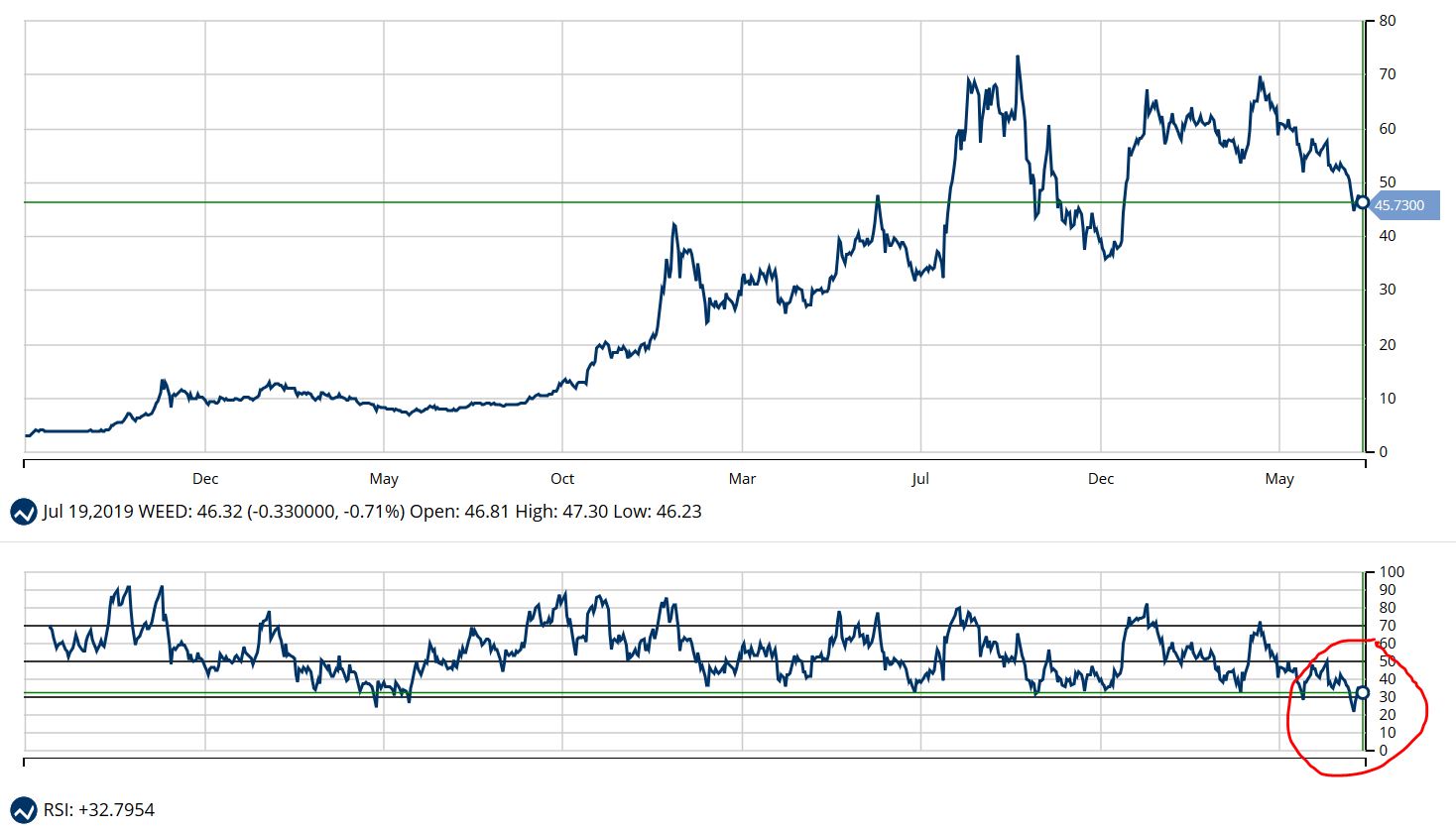 The second half of the year is a seasonally strong time of the year for the cannabis sector. We have seen this happen in 2016, 2017 and 2018. You can see the big rallies in the chart below.

Canada is set to legalize the sale of cannabis oils, edibles and beverages in December. Restricting these consumption options has been one of the reasons Canadian sales have been slow. Bringing these popular products online should give sales a huge boost.

Illinois legalization could spur other states to do the same

Mexico –  is set to go legalize recreational cannabis by the end of the year. If Mexico legalizes, that would leave the US as the only country in North America that has not legalized.

Mexico may legalize cannabis by the fall of 2019

These are just a few of the reasons the global cannabis market is still in its infancy. The cannabis industry is still in the very early stages of growth and analysts are predicting enormous growth in the next few years.

Grandview Research is predicting the global cannabis market will reach $66 billion per year by 2025.

The global legal marijuana market size is expected to reach USD 66.3 billion by the end of 2025, according to a new report by Grand View Research, Inc. It is anticipated to expand at a CAGR of 23.9% during the forecast period. Increasing legalization and use of marijuana in medical as well as recreational applications is expected to promote the growth.

Wall Street investment bank Jeffries is predicting the global cannabis market will be worth up to $130 billion per year by 2029.

The global cannabis industry could be worth as much as US$130 billion a decade from now if a wave of legalization sweeps the U.S., Europe and Latin America, according to a report by New York-based investment bank Jefferies Group LLC, which initiated coverage of several companies in the space on Monday.

Jefferies’ projection for the global pot sector is based on the prospect that in the coming years the U.S. and all countries in Europe and Latin America will legalize cannabis for recreational and medical purposes, as well as the potential penetration of other industry sectors in those markets, such as pharmaceuticals, alcohol, health and wellness and pet care.

Global cannabis market could be worth up to US$130B by 2029: Jefferies

The Big Picture on the Cannabis Sector

Cannabis stocks have been a bit weak for the last few months, falling into a bear market. Despite the weakness, the sector is still up in 2019 – and I see plenty of growth ahead. In fact, the cannabis sector is still in the very early stages of growth. Stay patient in the short run and focus on the long-term opportunity.

Disclaimer: This report is for entertainment purposes only. Every investor should consult with an investment advisor before making investment decisions. The Vodicka Group, Inc. is not a broker/dealer. We do not receive compensation for mentioning stocks. At various times, the clients, publishers and employees of Vodicka Group, Inc., may buy or sell the securities discussed for purposes of investment or trading. Michael Vodicka owns shares of Canopy Growth Corp (WEED) at time of writing.

Michael Vodicka is the president and founder of the Vodicka Group Inc., a licensed investment advisor (Series 65) and a financial journalist. He is also the founder and Editor of Cannabis Stock Trades – an online research platform that provides unbiased cannabis stock research.